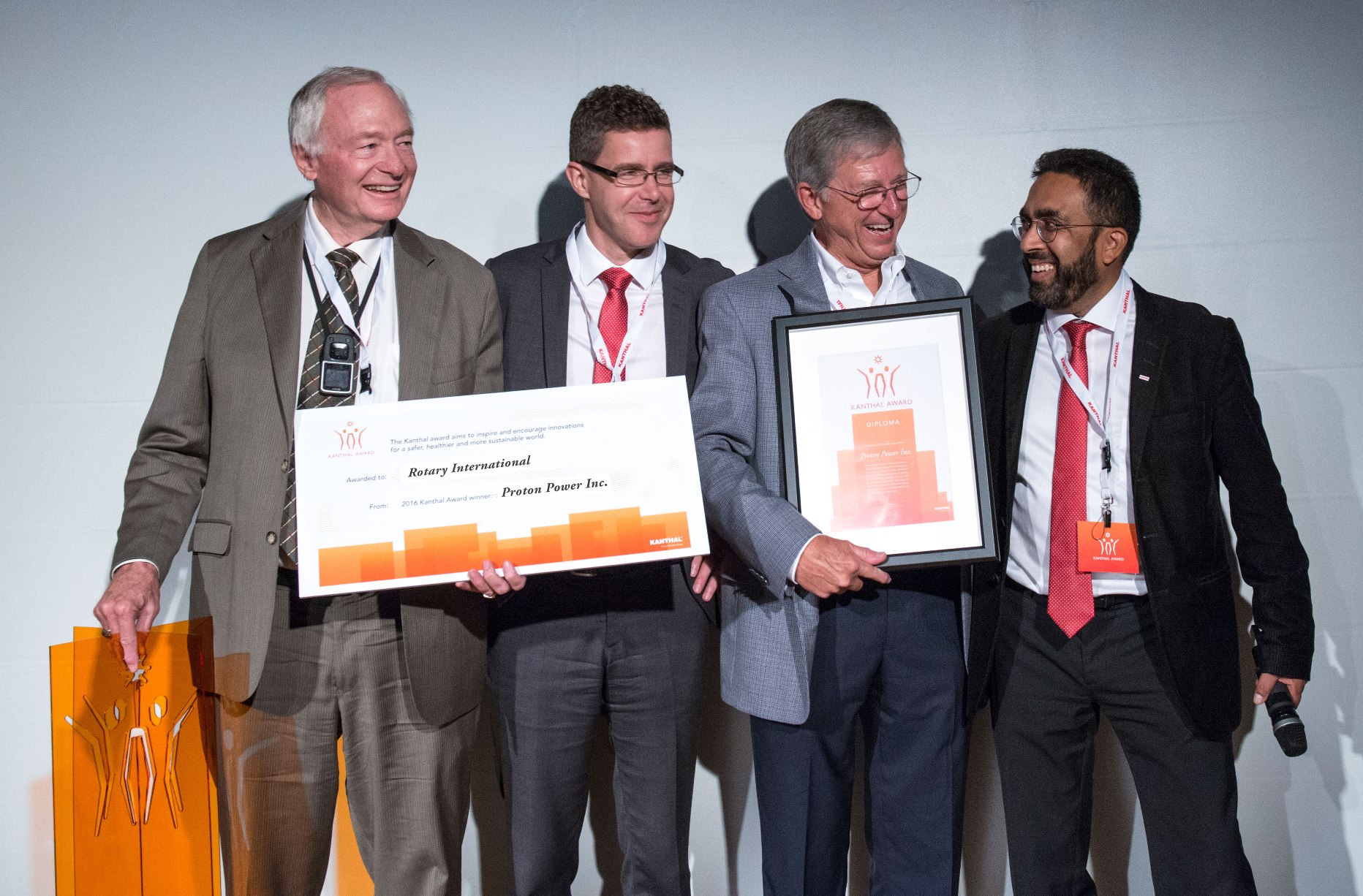 Proton Power Inc, Tennessee, USA was appointed winner by the jury at the prize ceremony in Nashville, Tennessee October 4th for their innovative technology referred to as Cellulose to Hydrogen Power (CHyP), ideal for clean energy applications. Co-products are bio char, a highly effective soil amendment, and wood vinegar that can be used as an environmentally friendly pesticide.

The motivation from the Jury is: "The winner of the Kanthal® Award 2016 is Proton Power for the development of an innovative technology which can use a variety of fuels for power generation combined with the production of bio-char for soil enrichment and hydrogen for fuel cells, this in an energy efficient process".

"Proton Power has with their technology fulfilled the key criteria for the Kanthal® Award, to promote innovation, sustainability and benefits on a global scale", says Dr Dilip Chandrasekaran, Head of R&D and Technology, Sandvik Materials Technology, and Chairman of the Jury.

"We had this opportunity to really make a difference which expanded way beyond our expectations. We call it the gift that keeps on giving", says Dr Weaver, CEO at Proton Power.

"This technology has so many ways to help mankind, a technology that can generate electricity, liquid fuels, you can help reduce contamination and pollution in the air and in the water, and there is just so many ways that it can help plants grow", says Dan Hensley, VP and COO at Proton Power.

The Kanthal® Award includes a prize sum of 5000 Euro ($5500), a statuette and a diploma. The prize sum is, however, not for the winner to keep, but is to be donated to a charitable organization which supports the same criteria the Kanthal® Award is based on – sustainability, health and safety. Proton Power Inc will donate their award to Rotary International, an organization in which Dr Weaver is an active member.

Proton Power won the Kanthal® Award in a tough competition with Oparz Co Ltd from Japan and Glasitt from Norway.

"One of the major challenges of the future is to support the world's growing population with food, water and energy in order to make the world a better place for everyone. By inviting our customers and partners to the Kanthal® Award we can all be a part of this challenge ", says Nicklas Nilsson, Vice President Sandvik Materials Technology.

"Innovations are part of the DNA of our company and a successful innovation often results from sharing ideas and combining them into new ones to create win-win solutions. Sharing knowledge is therefore also one of the basic features of the Kanthal® Award", Nicklas Nilsson continues.

Kanthal® is Sandvik Groups global brand in heating technology with access to Sandvik's world-class resources, including research and development and advanced processing technologies. The company has a strong tradition in innovation and makes extensive investments in R&D.

Send feedback about this page