Uponor AB situated in the middle of Sweden, is one of Europe’s leading manufacturers of plastic pipes and plastic coated steel pipes for the building industry. The company has some 450 employees and is marketing their products in more than 30 countries.

Plastic pipes in cross-linked polyethylene, which have been manufactured since 1972, possess very good long-term properties for use at high pressure and temperatures. The product range includes pipes for water transportation, radiator heating systems, under floor heating systems etc. The demand for these products has developed steadily and the production capacity has been increased accordingly. 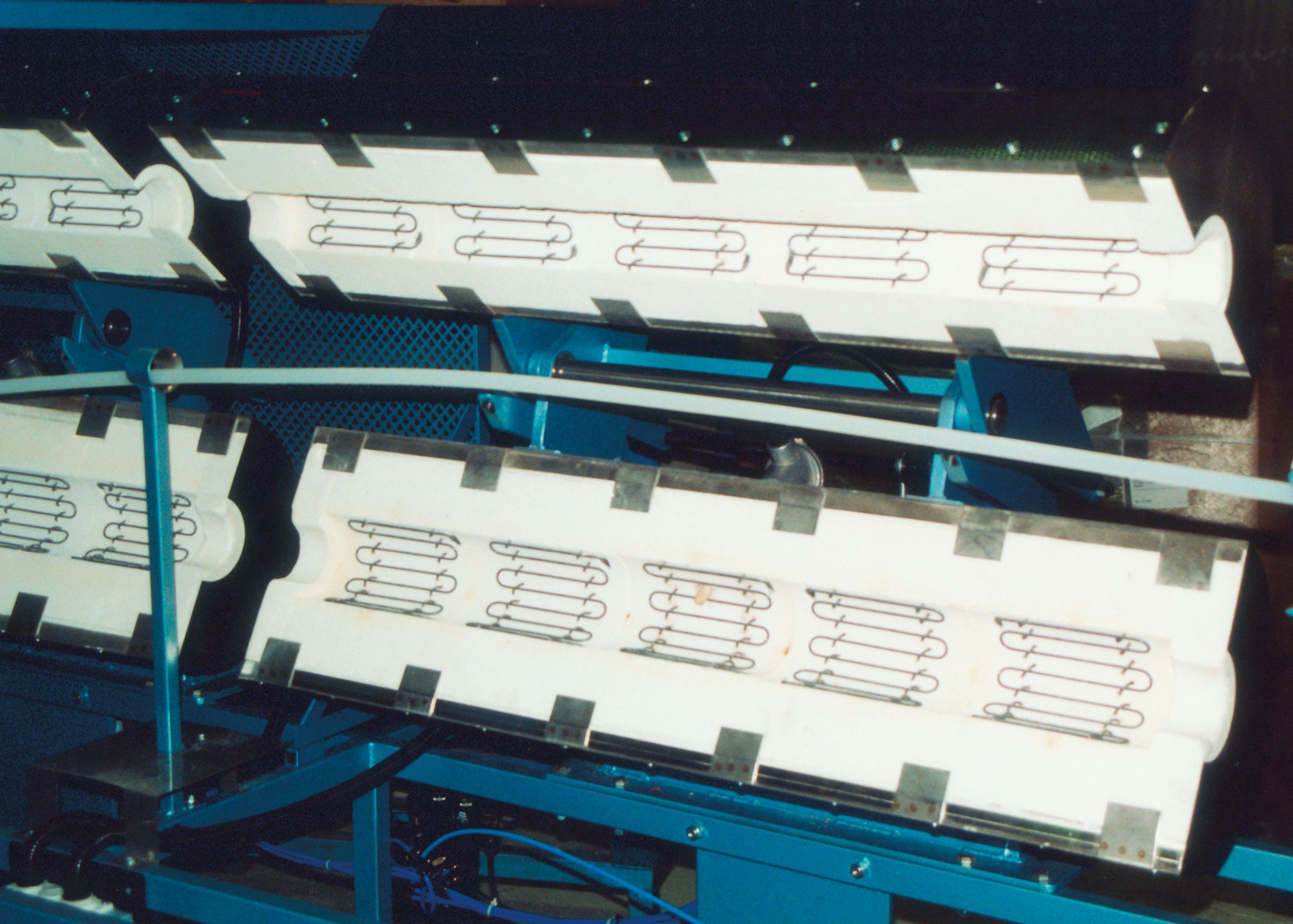 Superthal half cylinders. The heater is automatically opened when the process is stopped to avoid overheating of the pipes.

In the manufacturing process of plastic pipes for radiator heating systems, the pipes are heated up and a diffusion barrier of ethylvinyl alcohol plastic is applied. The heating was originally provided by a tube type heater of Fibrothal™ which worked perfectly well, but had its limitations in both power and temperature. As the production capacity needed to be increased to a far higher level, Kanthal was contacted for discussions concerning a new upgraded heater.

The old heater could provide a processing capacity of 15 – 29 pipe meters/minute (49 – 95 ft/min). The demands were set to increase the speed without using more floor space. The pipes are heated to 80°C (175°F) and when switching over to another pipe dimension, the heater must open up automatically to avoid melting the pipes. This happens daily.

Another requirement is the need for the pipes to be heated very uniformly as any unevenness in temperature creates problems during later production stages. Hence a heater chamber has to be efficiently sealed to control air ingress and circulation. 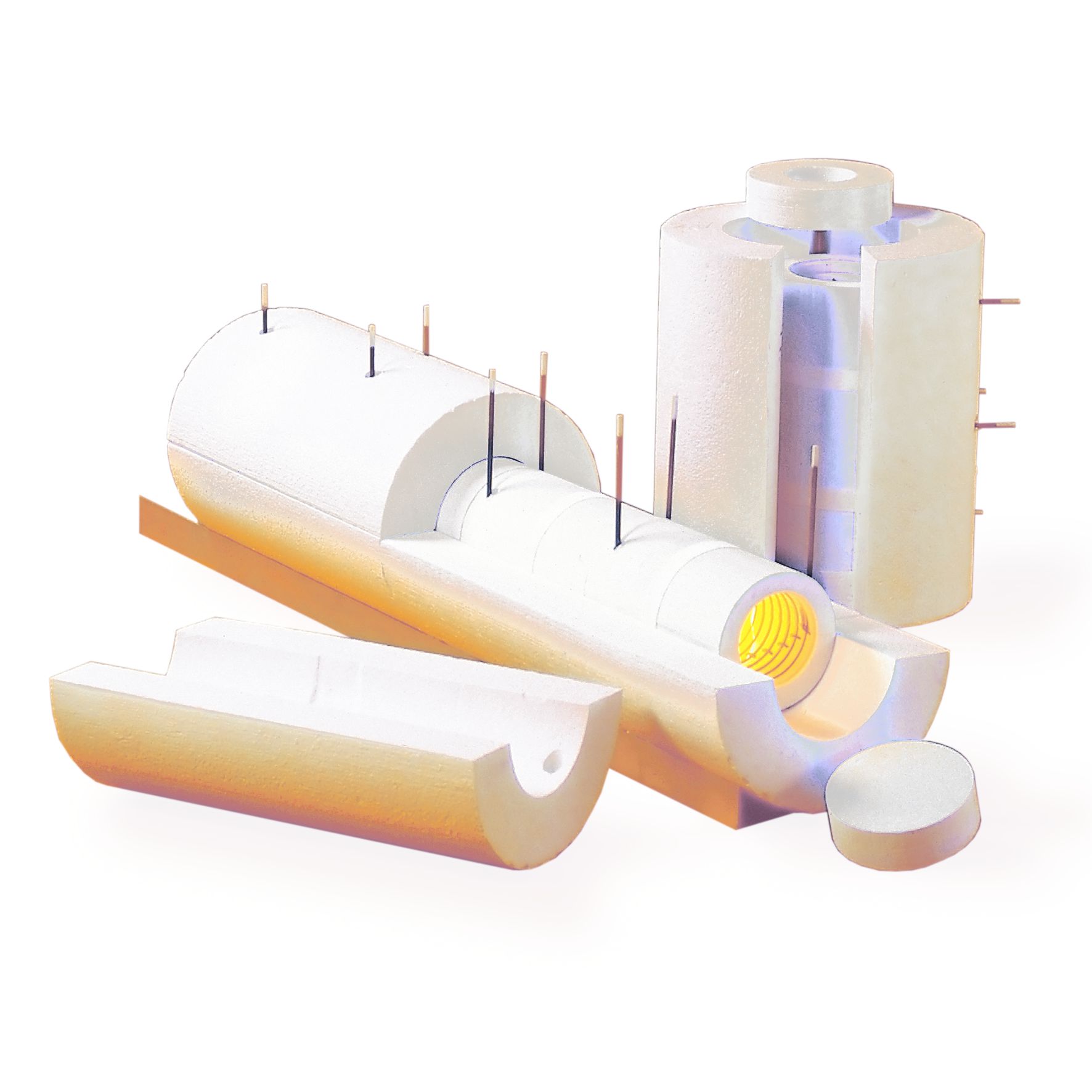 Superthal heating modules are available as cylinders, half cylinders and panels in a broad standard range. Several modules are mounted together in a flexible system to permit advanced temperature profiles and control. Kanthal supplies modules or complete cassettes.

Kanthal suggested a new heater consisting of Superthal® heating modules. Superthal is made of ceramic fiber with integrated Kanthal® Super molybdenum disilicide (MoSi2) heating elements which is manufactured in a standard range of cylinders, half cylinders and panels. The maximum temperature is 1600°C (2910°F) and power up to 249 kW/m2 (1606 kW/ft2).

The half cylinders were chosen in this case since the heater must open easily and total of 20 modules were mounted in two ready-to-install cassettes. The temperature in the heater is 700 – 800°C (1290 – 1470°F) which gives a moderate element temperature of 1340°C (2445°F). The elements are wired in two series connected groups directly to the line voltage hence no transformer is needed. The power is regulated by a thyristor. Kanthal supplied the cassettes and the electric control unit and Uponor completed the assembly by adding the opening devices and other equipment. The heater was installed in May 1996 and has since been in continuous operation.

The pipe drawing speed is now 40 – 50 m/min (131 – 164 ft/min), which corresponds to an increase of 50%. It is possible to reach max. 75 m/min (246 ft/min) just by increasing the heater temperature, but that would need additional cooling capacity in the production line. Nevertheless, the heater has a substantial additional power capacity if needed later. It is also possible to regulate the power of the heater automatically to correlate to the pipe drawing speed. A specific advantage with Superthal® heating modules is that higher element temperature does not affect the lifetime of the elements.