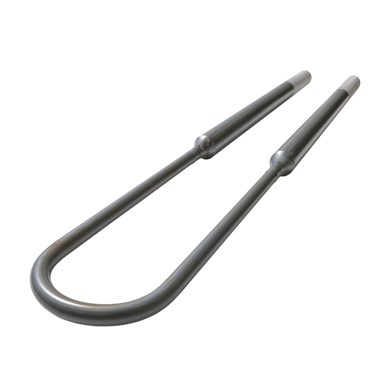 Kanthal ® Super HT is designed for a longer lifetime of small dimension elements in temperature cycling conditions. The hot strength and form stability is improved. The maximum operating temperature is 1830°C (3330°F), and the element is suitable for furnace temperatures between 1500–1750°C (2730–3180°F) approximately.

The special feature of Kanthal® Super HT is that the growth of the oxide layer - the glaze - is much reduced, compared to Kanthal® Super 1800 and 1900. A thin oxide layer results in a much-improved service life, because the tensions are reduced between the base material and the surrounding oxide, depending on the different thermal expansion coefficients.

Kanthal® Super HT is used in laboratory and high-temperature process furnaces, and as a "problem solver" for productivity issues at high temperatures.